POLLING: Arizona AG Race a Toss Up with Two Weeks Until Election Day

Washington, DC — With two weeks to go until Election Day, the Arizona Attorney General’s race is as tight as ever according to two polls, including an independent pollster. Trump’s handpicked candidate, Abe Hamadeh, has faced significant questions for the entire campaign for his dishonesty about his legal record and voter fraud, his anti-Semitic rhetoric, and his anti-abortion stances.

Susquehanna Polling & Research and the Federalist shows Kris Mayes with a narrow lead in the race, 44.7% to 41.9%. The poll also notes that abortion is a top issue for respondents in the poll, with 36% of respondents choosing it as one of two critical issues for them this fall.

A poll from Clarity Campaigns also shows Mayes with a narrow lead in the race, 43% to 42% with 9% of voters remaining undecided. 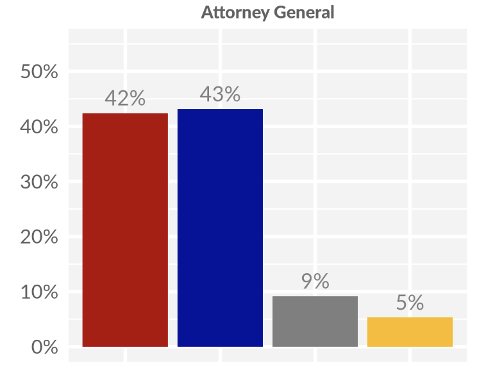 With Arizonans already casting their ballots, this race will remain highly competitive all the way to Election Day, and Kris Mayes is in a strong position to flip this seat.