ICYMI: Health Care on the Ballot in Battleground States

This week, the U.S. Senate kicked off Judiciary Committee hearings on President Trump’s Supreme Court Justice nominee Amy Coney Barrett. A major focus of the hearings surrounded the future of the Affordable Care Act – scheduled to be heard by the U.S. Supreme Court just one week after Election Day.

DAGA hosted a livestream with Patient Advocate Peter Morley, North Carolina AG Josh Stein, Indiana AG nominee Jonathan Weinzapfel and Montana AG nominee Raph Graybill. All three leaders are running against GOP candidates who support the ACA Repeal lawsuit that threatens health care for more than 20 million Americans and puts coverage for the more than 133 million people with pre-existing conditions at risk. More than 65,000 people tuned in to watch. Below are the highlights: 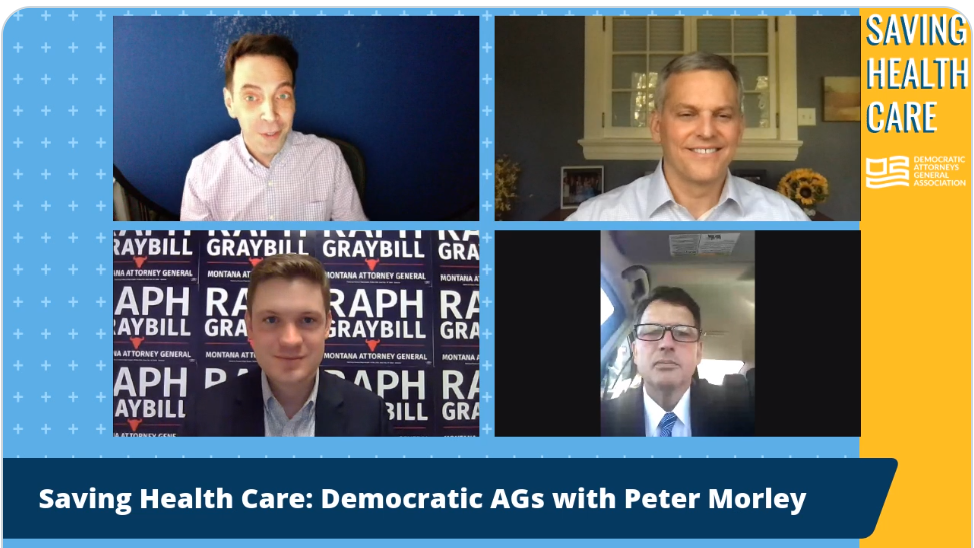 Peter Morley shared his story about his battles with affordable health care saying, “this is so personal to me … health care has affected my life in such an extreme way, it encompasses every single day of my life.” Going on to say, “I now manage over 10 pre-existing conditions … I live on the brink of financial ruin and only live modestly thanks to insurance and the fact that I can’t be discriminated against because of a pre-existing condition.”  Morley closed by saying, “the ACA has meant focusing on healing, not bankruptcy. I did not ask to be chronically ill.”

As a member of the Democratic AG coalition defending the ACA, North Carolina AG Josh Stein said, “we will be in the United States Supreme Court arguing with our greatest persuasion and with our last breathe to defend the Affordable Care Act.” AG Stein continued, “if the Republican Attorneys General, if the Trump administration get the relief they are seeking – the Affordable Care Act and all of its protections will be gone at the blink of an eye and we cannot tolerate that. The cost to individual lives, the cost to our entire health care system would be so devastating and that’s what I am fighting for and my colleagues are fighting for.” AG Stein closed by saying, “health care is on the ballot … if you care about people having access to health care than you have to vote Democratic this November. It’s that simple.

Montana AG nominee Raph Graybill said, “health care has really coalesced into the main issue in the Attorney General race in Montana.” Graybill continued, “rip away the ACA and you lose all that access.” Graybill closed by saying, “I am running to try to be part of the movement to fix the problems this lawsuit is creating. My opponent by contrast, who is as extreme as they come, said the entire reason he decided to run for Attorney General was this lawsuit. He thought Montana wasn’t activist enough and Montana should work harder to take away health care from people.”

Indiana AG nominee Jonathan Weinzapfel said, “the Affordable Care Act and protecting Hoosiers health care is really the most important thing on the ballot this year.” Weinzapfel continued, “If my opponent has his way, these are folks that will once again find themselves discriminated against by insurance companies … that’s just not right, especially in a global pandemic.” Weinzapfel closed by saying, “this is just going to be devastating for Hoosiers families and it boggles the mind to think that anyone would consider this to be good policy, a good step forward, in the middle of a global pandemic … My vow, is that on day one as Indiana’s Attorney General I will pull Indiana out of that lawsuit … I think it’s important to send a message to Hoosiers and to the Supreme Court, that the state of Indiana sees this lawsuit as politically partisan driven that will have a negative impact on the health care for hundreds of thousands of Hoosiers.”

Peter Morley closed the conversation by saying, “we can and we will win these races on a strong health care message.”

Just like in previous successful cycles for Democrats, access to affordable health care is a top voting issue this November. There is no clearer distinction for voters than Democratic Attorneys General at the Supreme Court defending the right to meaningful health care and Republican Attorneys General on the other side trying to take that health care away.

Read more about health care on the campaign trail in this memo here and read about DAGA’s investment in battleground states here.