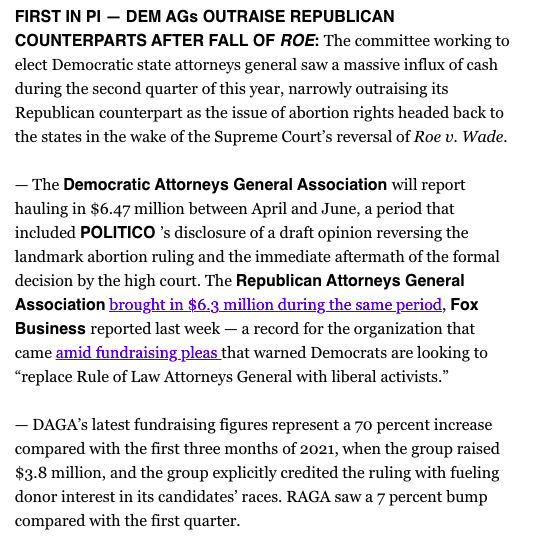 Democratic AGs are on the front lines of fighting for rights and freedoms in this country. Following the Supreme Court’s devastating decision in Dobbs v. Jackson Women’s Health Organization that eliminated the constitutional right to abortion, Democratic AGs and candidates across the country have been stepping up with actions to protect reproductive health care and speaking out on how they will defend abortion access in the months and years ahead. Americans can trust that Democratic AGs will never stop fighting for them. DAGA has received major national attention in the wake of this catastrophic decision as it fights for candidates in favor of health care and abortion access.

“Thank you to supporters and stakeholders across the country who continue to invest in state Attorneys General races and recognize the key role that only Attorneys General can play in defending rights and freedoms that we cannot take for granted. While Republicans are embracing Trump’s brand of extremism and prioritizing their personal agendas, Democratic AGs and candidates are showing Americans that as the People’s Lawyers they’re defending the people of their states. We’re on the frontlines of the biggest issues in America, keeping our communities safe, fighting for abortion access and voting rights, and taking on big polluters. We’re excited about the momentum we have right now heading into the home stretch of the 2022 midterm cycle and urge more of our allies and supporters to join us in this fight to win this fall. States are now the major battlegrounds for these big policy fights, and our Democratic AGs and candidates are proud to be leading on them.”