WASHINGTON, D.C.– Today, the Democratic Attorneys General Association (DAGA) released the following statement from DAGA Political Director Farah Melendez, a Utah native, after a photo surfaced of Utah AG Sean Reyes attending Trump’s Nevada campaign rally without wearing a mask or practicing social distancing. The rally occurred inside and eclipsed the maximum attendance currently allowed for indoor events in Nevada. This is at least the second time AG Reyes has traveled out-of-state in the last month to attend a Trump event not in compliance with Center for Disease Control COVID-19 guidelines.

“Sean Reyes decided he couldn’t be bothered with the responsibilities of the Office of Attorney General and decided instead to take a plane to Nevada to cozy up to Donald Trump at his indoor rally—without a mask. Sean Reyes’ disregard for public safety is dangerous and goes against what scientists and even Trump’s White House advises. His actions blatantly ignore the thousands of Utahns in hospitals struggling to overcome COVID-19, the hundreds of neighbors we’ve lost due to inaction like his, and the entire state that depends on the Attorney General to lead by example. Since day one, Reyes has prioritized his own political ambitions above the needs of the people of Utah. Sean Reyes is out of touch with Utah values and my family—and all Utahns—deserve better.” 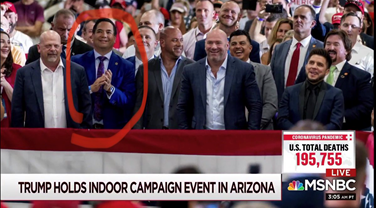