Washington, DC — Last night, former President Donald Trump made his endorsement in the Georgia GOP primary for Attorney General. John Gordon is AG Chris Carr’s Trump-loving primary opponent who’s been attacking him for not supporting the former president and his Big Lie about the 2020 election, making Gordon the perfect pick for Trump’s endorsement.

If it wasn’t already clear, AG Carr has a Donald Trump-sized problem on his hands. Here’s what people are saying about the endorsement news: 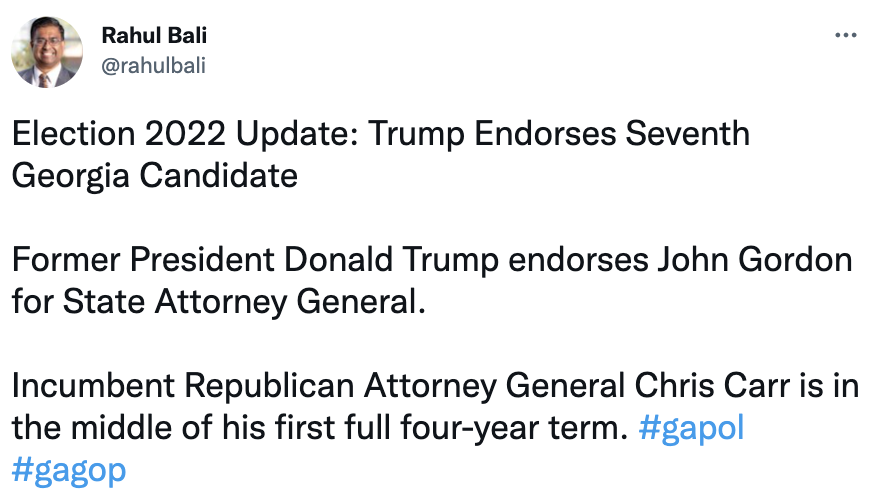 “The latest beneficiary of Trump’s blessing is John Gordon, a conservative lawyer who announced his challenge to Attorney General Chris Carr with effusive praise for Trump. Gordon renewed his expired law license last year to help Trump’s failed legal challenge of the Georgia election results and recently told WDUN that ‘there is no question in my mind that Donald Trump won Georgia.’ Trump indicated Tuesday his support had more to do with Carr than Gordon, who ran an unsuccessful campaign for state Senate in 2018. In a statement, Trump claimed Carr did “absolutely nothing” to support his false claims of rampant election fraud in Georgia.

“The Democratic Attorneys General Association predicted the GOP infighting would drag both candidates to the party’s right flank. ‘We’ll get the popcorn ready as the GOP primary heats up in the Peach State,’ the group said.”

“On Tuesday evening, Mr. Trump announced the endorsement of another Republican challenger in Georgia: John Gordon, who is running against the state’s attorney general, Chris Carr. Mr. Trump again cited the postelection period in 2020 and accused Mr. Carr of doing ‘absolutely nothing’ to support the former president’s baseless claims of voter fraud.”

“‘Great news for Georgia! A very successful Businessman and Attorney, John Gordon, will be running against ‘Do Nothing’ Attorney General Chris Carr,’ Trump said in a statement emailed to reporters. ‘He spent more time hunting those people who fought for the truth than he did those who cheated in the Election. Chris Carr was a disaster every step of the way,’ Trump complained.”

“In his statement endorsing Gordon, Trump wrote Carr ‘did absolutely nothing to stop the 2020 presidential election fraud which, as facts have shown, and are showing, was rampant. He spent more time hunting those people who fought for the truth than he did those who cheated in the election.’ Trump accused Carr of looking for an easy way out, rather than looking for election integrity. Gordon ‘will get to the bottom of it all,’ Trump continued, adding Gordon is also ‘strong on the border, crime, our military, vets, and will proudly protect our Second Amendment,’ concluding Gordon ‘will never let you down!’”